With the expansion of the fishing industry during the mid 1800’s there was a constant need for new and larger boats to feed the markets and so like all of the fishing stations along the coastline, boat building yards were established. In Hopeman there were three yards with two of these shown on the attached plan of 1905.

Thomas Main & Thomas Young ‘Hall’ – west beach yard – In operation from around 1860 and located opposite the entrance to the railway goods yard.  The business was started by George Slater, a joiner and boat builder from Rathven (Portessie), when he came to Hopeman with his young family during 1846. He only built boats for a few years prior to becoming a successful fisherman. He died in 1881 – see genealogy section on Bruce/Slaters. There is now no trace of this yard ever having existed as it is now covered by sand dunes.

Don Main’s yard located at the bottom of Harbour Street and noted on the attached plan. It was in the area where small boats are now stored for the winter and the old sheds in that area were his workshops.  Daniel (Don Main) and his family were both fishermen and boat builders and they built the largest boat ever to be built in Hopeman – The Steam Drifter Laich o’ Moray  INS 31 during 1909.  Due to her size the Laich was actually constructed between his yard and the old harbour. Built of wood with a length of 84.2 feet, breadth 19.3 feet and draft of 8.8 feet she must have been quite a sight in the village during this build. See Genealogy section on the ‘Main’ family for photographs of the family.

Findlay’s Yard located at the East side of the harbour at the end of what is now called Beach Terrace. The yard was opened by John Findlay, a boat builder from Rathven or the Sloch, (Portessie) when he came to Hopeman during 1861.  From that date the family ran the business for over 100 years building many of the Zulu type sailing and motor fishing boats for Hopeman owners. During the 1930s the yard progressed to a larger type of wooden motor boats of around 55 feet such as the ‘Benmore’,  ‘Energy’ and ‘Latisha’ which were replacing the older and expensive steam drifters. The last of this size of boat to be built was the ‘Harbinger’ for owners in Wick during the early 1950s and after that the yard only built smaller lobster boats with the last of these being the ‘Star o Moray’ during the early 1960s. This boat is still moored in Hopeman and owned by Ian More who ran the ship chandlery business at the harbour for many years. Findlay’s yard finally closed during the 1960s with Alexander (Sanny) Findlay the last proprietor.

Launching a boat from this yard must have been a marvellous experience for all of those attending. It would commence in the boatyard with the launching party and spectators listening to a few words spoken by the yard owner and possibly the minister.  An appointed female family member would then break a bottle of spirits on the boats bow before it was hauled out of the yard, over the dirt track road, and on down the sand dunes to the beach where it would be left to float with the incoming tide.  To assist with this there was a winch house located on the beach (see photo) from where a wire was run down to a fixing set into a rock at the spring tide low water mark on the east side of the beach.  On this fixing a running block was attached and the wire run back up to the boat in the yard.  The winch was hand cranked and it must have taken quite an effort to move the heavy boats.  All of this equipment have since disappeared apart from the fixing at the low water mark which is still there.  From the beach the new boats were towed into Hopeman harbour for final fitting out alongside the quay.

During the mid-1930s the yard was a favourite haunt of Prince Philip when he attended Gordonstoun School. See book ‘Hopeman 1805-2005’ for sale via this site for more information.

Gallery of Photographs and Plans 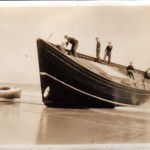 1930 – Boat Launch on the beach from Findlays yard. 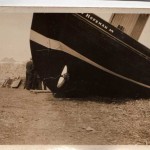 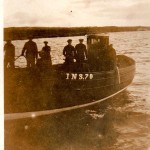 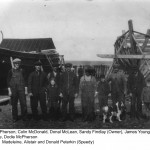 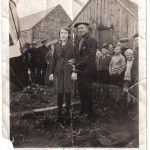 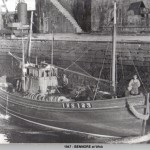 1949 -Findlays winch house on beach. The shed was often replaced after storms