The surname of Slater with their origins from Hopeman families have all but disappeared (2015) however there are still many families where there are connections to the Slater’s still living in Hopeman.

The original settler was George Slater (Auld Dod Slater) who was born during 1805 in Rathven or the Sloch and who married Margaret Bruce b.1806 (Rathven) and they had seven of a family.  Rathven was the Parish around Buckie and ‘The Sloch’ was the old name for the fishing port of Portessie.

Margaret Bruce died in 1843 aged 37 whilst in childbirth with daughter Margaret and in 1844 George married Isabella Hendry b.1807 (Burghead) and Thomas (Tam) was born in the Sloch.

During 1846, the family moved to Hopeman where the last child Joseph (Dovey) was born in 1848. The family who relocated to Hopeman comprised of Dod Slater, his wife Isabella Hendry, eight children, Dod’s widowed father Alex Slater (1744 -1861) and Elsbeth Bruce b.1830 who was Margaret Bruce’s niece and the housemaid. Here we now have a tie in with the Bruce family (see Bruce section)

George (Dod) Slater started working in Hopeman as a boat builder, then as a fisherman before becoming a very successful fish curer sending fish all over the country including a thriving trade to Russia.  During 1884 he built the Nuek as his residence and the wind vane of a schooner located on the top of the Neuk tower was a present from one of his Russian trading partners.

On arriving in Hopeman, Dod built the main house at 5 Peepy Street.  Living conditions soon became cramped so he built an extension on the north east gable of the house.  This was called the sma’ hoose and Dod’s father Alexander and the maid Elsbeth, moved in there.  Elsbeth lived the rest of her life in this house and died unmarried.

During 1851, the Ice House and the Mill building (the Mull) on Harbour Street was built and the remains of the wooden structure which had carried William Young’s gravity railway from Dan Ralphs shop (next to the bridge) to Rock House (now called Rockola) was removed and replaced by the present earthen embankment which fronted the Mull and carried down on to the harbour. The embankment was built using spoil from the various stone quarries used to build Hopeman and it was during this period that Dod also built a block of four houses – Teenie Ann’s; Betsie’s; Janet Slaters & Wullickie Bettie, down Harbour Street with the last two being No 1 and 3 Peepy Street and the levels of these houses were set to suit the level of the new road to the harbour. This block was initially occupied by the Slaters. 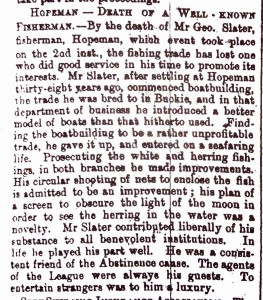